Diana Hendry’s most recent collection is The Watching Stair (Worple Press). She’s published six other collections including The Seed-Box Lantern: New & Selected Poems (Mariscat). Diana’s the author of more than forty books for children. Harvey Angell won a Whitbread award and her YA novel, The Seeing was short-listed for a Costa Book Award. Diana has worked as a writer-in-residence at Dumfries & Galloway Royal Infirmary, as a Royal Literary Fund Fellow at Edinburgh University and has co-edited New Writing Scotland. She’s assistant editor of Mariscat Press, Edinburgh.

Here, in the harbour, the water is green.
Small fish needle themselves in and out
of its sheen, changing colour like wives
anxious to please a capricious spouse. Was
it fish taught the women how to embroider,
sitting, in black, in their doorways and dark
interiors, needles a tiny, fishy dash?

The nets of the fishermen are ochre and
bobbled with fat pink radishes. Picked
clean (by fingers stubborn as birds beaking
out worms) and spread on deck, here’s a flash
jewelled cloak for the Merman King. How he’d
trail and boast it over his shoulder! How
richly the ruby radishes gleam! A giant’s

baked sand-pies of concrete then tumbled
them out of his sack to fatten the quay.
The lighthouse, repro Venetian, explicitly
phallic, corkscrews its reflection back to
a notion someone once had concerning spirals.
Under the lighthouse, on its big stone doorstep,
a party of brightly-coloured tourists move

like cells on a microscope plate, afloat
in a fluid of sea and sky. Look – now
there’s joining, now dividing. Over the water
you can hear them laughing, not knowing
what moves them, believing it’s all their own
volition that pulls them into a cluster,
makes a trio, resolves it all in a final

couple, alone and hugging. The sea’s trying
to find the far edge of sky. It’s out there
somewhere, a roller towel with sea on one side,
sky on the other. When the sea has it measured
they’ll go on their round together and
sky look up and sea look down. ‘Till then
there’s nothing else to do – except make blue.

SONG FOR THE SEA OF CRETE

“We are immersed in an enormous song and we
shine like humble pebbles as long as they
remain immersed in the sea.”

What matters is the sea – its saga
of light and wind and how it is faring
in its marriage with sky. Tonight
sky’s drawn the line – will have nothing
to do with sea’s incessant desire
to merge in a mist of dusky bliss. Sea
can stay outside and cool its heels.

What matters is the sea and how its master,
the sun, is treating it – beating its morning
metal until all the sparks fly, smelting it
into dimples and dazzles then nightly leaving it
solvent, soldered, sullen, steel.

What matters is the sea – how it hurriedly
flings down a rustle of satin it’s forgotten
to iron; its sudden, revelatory blue
as you cut through a mountain
and it’s down there heaving in its workshop
of passion, all frantic kerfuffle
and action, shaping waves in crescendoes,
honing a cut-throat phrase on a rock.

What matters is the sea: the ECT shock
and blue flash of its voltage; its hurl at land –
a child’s leap at its father – its billioneth
dash; its rush in and out as for something
that’s lost and of urgent importance.

What matters is the sea and the blue-
shadowed duvet it fluffs under the feet
of the tourist Icarus who float-flies over it
on a boat-drawn parachute. What matters
is sea’s steady continuum beneath the beach bar’s
fatal beat and the way when night at last rides off –
a girl in evening dress on the back of his Vespa –
sea just laps it all over as if nothing had happened.

What matters is the sea in the lull
of its harbour waters; its stormy tough stuff
beyond the quay; its beach fandango
in a can-can of petticoats. Mountains matter,
but only to say what the sea isn’t. 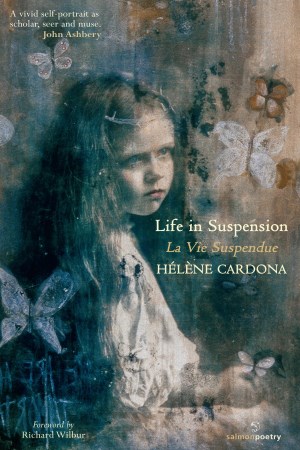