Judy Koren grew up in England, gained a BA in English literature then moved to Israel and added a Master’s in information science. After a career as an information analyst she retired and returned to poetry, her first love. Her poems have appeared in Israeli literary magazines (The Deronda Review and the annual Voices Israel Anthology) and in international literary publications including Better Than Starbucks; Blue Unicorn; Lighten Up Online (UK), The Orchards Poetry Journal, The Poetry SuperHighway, The Road Not Taken, The Society of Classical Poets “Best of 2021”, and The Taj Mahal Review. She is currently President of Voices Israel, a national society for poets writing in English.

Beach cafés: loud lights and glaring music
dazzle like fiery beads scattered across
the intervening silent moonlit darkness
and glimmering wavelets sighing soft to shore.
A lone light on the breakwater discloses
a fisherman at peace; on the promenade
election promises from contesting mayors
tear in the wind. On the deserted deck
of the Surfboard Café two shadows kiss in moonlight,
their kisses likewise fragile promises.

Along the shoreline between sand and sea
a thickset, unmistakably un-Indian
Indian guru, in white pantaloons
headband and sash, strides ankle-deep in surf,
followed five paces after by a woman
a bit overweight and very discontented,
picking her surly way through the same water
his holy feet have blessed a moment before.
Silent they walk and fade into the dark.

What in their joint life has beached this pair?
Did they once kiss like the Surfboard Café couple
locked together in Mediterranean moonlight?
Did Eastern philosophy swirl them together?
Did it then seep away, an outgoing tide,
leaving behind only the empty shells
of flowing skirt, ridiculous pantaloons
which cannot disguise the chasm now between them –
three metres of sand and foam, eternity?
Part of me dares to hope this walk through water
unlikely as it seems, may nonetheless
help them achieve nirvana.

The Mediterranean Sea is calm today,
the breakwater is lined with fishermen
dangling their baited hopes; two swooping gulls
pattern with herring-stitch the gentle swell
in search of minnows; but beside the road
a notice – stark, uncompromising, loud –
proclaims: Tsunami Evacuation Route!
Flee eastward to escape to higher ground
(over the highway? over the railway lines?)
you’ll only have two minutes: follow the signs!
I contemplate the Great Israeli Public:
three Russian matrons, comfortably stout,
a pair of soldiers, talking Arabic,
a girl talking American to her phone
with eyes for it alone, colliding past me;
a string of raw recruits from the naval base
puffing and panting, struggling to keep up
(no breath for talking) with a female sergeant
barking commands in Hebrew; a mother and child;
a sprinkle of pensioners by the café,
two cats eyeing each other warily
and one stalking a pigeon – which of these
could outrun a tsunami?
Ah, but what’s new?
We are surrounded by tsunamis here –
to north, northeast, southwest, a boiling sea
endlessly threatening to overflow
and storm-clouds massing far over the east:
why should we spare a thought for this tsunami?
With all the threats that cannot be outrun
why care about one which may never come?
So the inhabitants of Bat Gallim –
Russian and native, soldiers, pensioners,
gulls cats and pigeons – disregard the signs
and carry on their uneventful lives.
The Mediterranean Sea is calm, today.

In the park that has replaced the houses of
the Ottoman Empire (16th to 20th century
C.E.), a stone’s throw from the Ramses Gate
monument to the Egyptian occupation
(13th century B.C.E.), I sit
peacefully, watching an acrobatic troupe
of swallows twisting, dipping, flashing by. A calico cat
languidly crosses the grass. A daring swallow
veers and dive-bombs the enemy, plunging low,
one wing-tip brushing an ear; then streaks away
up again into the sky. The startled cat
stops, looks around, looks upward, shakes its head,
considers retribution; meanwhile two swallows
in a display of bravado nearly collide,
at the last moment shearing apart. This place
is full these days (21st century C.E.)
of such suicidal encounters, intermittent
invitations to a dance of disaster.

The story doesn’t say how long or quick
the journey, how he did it – through a maze
like Ariadne? Sailing down the Styx
as some portray? Or through a tunnel blazed

into the darkness? But however slow,
Euridice floated before his eyes
the entire way; love set his dreams aglow,
no danger could deter him from the prize.

More dangerous, his doubt on his return:
Was she behind? Alive? Or just her ghost?
Trust was the lesson that he had to learn;
he fought the urge to test the god-given oath…

till at the end, he faltered and looked back
and heard a sigh fading along the empty track.

Mosaics here surprise: you wouldn’t know,
tramping on thistles, brittle summer stubble
and tripping over rubble, stumbling, slow,
that this rough trail leads to the long-ago

till suddenly – a broken arch, a floor
patterned in blue red black, flowers and birds
outlined in tesserae; below them, words
in Greek, a cross; this church by a rocky shore

for fifteen hundred years has lain here
abandoned, aeon-battered, yet still haunted
by echoes of shuffled feet and plainsong chanted:
felt, though unheard, upon the quivering air.

Silence; a cooling breeze as evening falls
upon the ghosts; a spur-winged plover calls
its lonely sik-sik-sik; above the shallows
a pied kingfisher hovers, hunting minnows.

Previously published in The Orchards Poetry Journal, June 2021; and on the website of the Society of Classical Poets, January 2022 (where it won an Honourable Mention in their “best poems of 2021” contest). 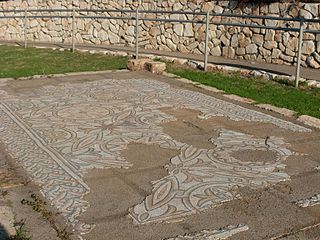 Poetry in this post: © Judy Koren
Published with the permission of Judy Koren


THE ODYSSEY - HOMER - FROM BOOK VIII
So he hurried up without even taking his cloak off, and seized a disc, larger, more massive and much heavier than those used by the Phaeacians when disc-throwing among themselves. Then, swinging it back, he threw it from his brawny hand, and it made a humming sound in the air as he did so. The Phaeacians quailed beneath the rushing of its flight as it sped gracefully from his hand, and flew beyond any mark that had been made yet. Minerva, in the form of a man, came and marked the place where it had fallen. “A blind man, Sir,” said she, “could easily tell your mark by groping for it—it is so far ahead of any other. You may make your mind easy about this contest, for no Phaeacian can come near to such a throw as yours.”
Translator: Samuel Butler
This website uses cookies to improve your experience. We hope you're ok with this, but you can always opt-out if you wish. Accept Read More
Privacy & Cookies Policy