Born in Edinburgh, Scotland, Morelle Smith grew up in both urban and rural environments and the pattern of moving between these seems to have persisted. The oscillation has increased to include movement between elsewhere and home. Travel has become a rhythm in her life. Morelle’s other ambition was to write and since the eighties, she has been a professional writer of poetry, fiction and non-fiction.

She has a particular interest in the Balkans, her most recent collection of poetry is titled The Ravens and the Lemon Tree, She’s also a translator from French and some of her work has been translated into French, Albanian and Romanian.

Some of her work can be found through links on Rivertrain.

A path leads from the city, up the mountain.
Beyond the pine woods it is stony,
winds in sweeping curves, from left to right.
Among the stones and rocks
grow tufts of spiny grass,
and flowers with spiky leaves.
At each bend in the path
I see the bright red rooftops of Dubrovnik
growing smaller, the surrounding sea
more turquoise and purple blue.
A few drowsy crickets warble,
butterflies drift and soar in the still air.
Late summer sun beats on my shoulders.

At the top there is a long stone wall.
Neat graffiti on an entranceway reads
BEDUINS WERE HEARE.
When I turn the corner,
a wild and freezing wind springs up,
pushes itself at me,
and when I see the inland mountains,
with their rags of vegetation,
brownish-yellow, desolate,
I know where the wind has come from.

I walk past the wall. The view opens out.
The wind is a wild creature, whipping at me.
On one side, a blackened, twisted bunker,
half-collapsed. On the other,
an enormous flawless cross, in cream stone.
This was where they dropped shells on Dubrovnik.
On the rooftops, on the ancient churches,
on the yellow marble streets.
The wind howls and shoves at me,
tries to push me off the mountainside.

Back on the stony mountain path
there is no wind, the fierce and spiky stalks
end in fragile flowers
that butterflies land on,
fold their wings and disappear
into a yellow, grey-green background.
No sound, except the rubbing of the crickets.
By the time I reach the city,
the sky is flushed with pink and violet.

Dubrovnik is built into the hillside
and linking every layer of street and houses
there are flights of steps,
walled and leaned over,
by tree branches, stitched with blossom.

I climb down the layers of steps
and once I’m home,
I go out on the balcony.
A smoky scent, like burning leaves,
drifts up from a garden in the valley.
The first star appears above a patch of lilac sky. 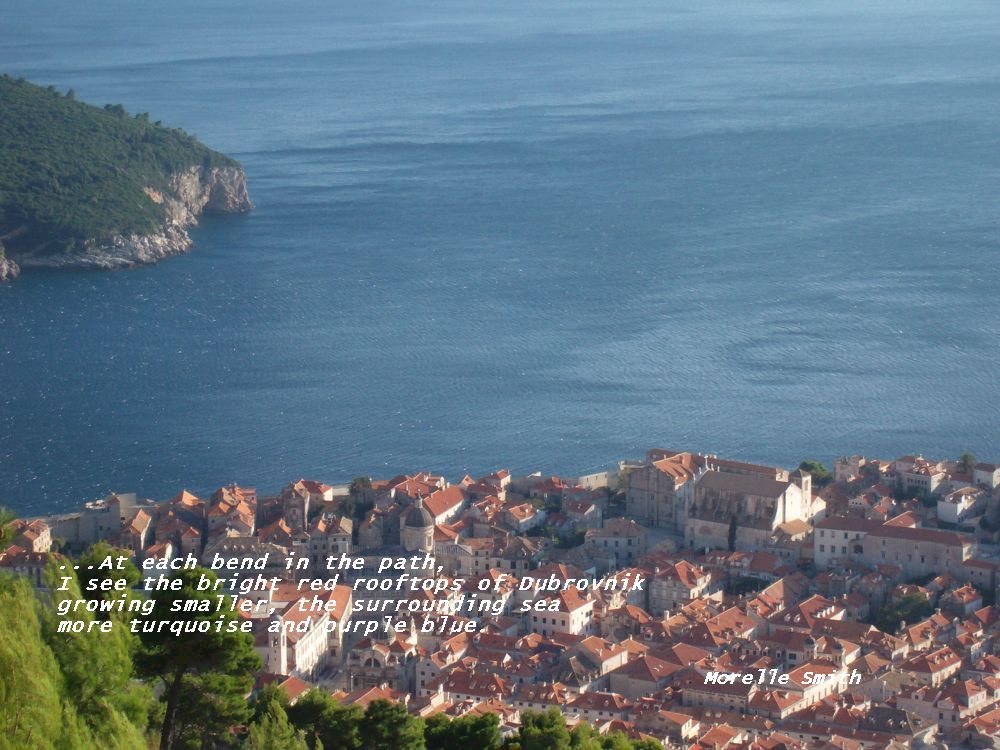 The psyche of this country, like the land,
is full of cliffs, ravines and precipices.
For all the space, there is a sense
of being folded and cocooned in rock.
The mind is terraced, like a vineyard,
with beliefs, running as deep as winter
in the frozen footsteps of the valley.

They lie in gorges, painted on rock walls,
reminding you of feelings
that do not belong to you.
You are a slip of their tongue,
you inhale only a flicker of this feeling
and it removes all solid ground.

After that, there is the sea –
roped and gemmed with light,
pale green and salty.
Holding you up like time.
Swallowing you,
like time.

What god is tracking me?
Whether you go with it or resist,
whether you deny it, rush inside it,
revere it or cajole it,
it is there.

To be accepting of either outcome –
there’s a thing.
To not cling, to what you want so much
to be the future.
To not need it to be one thing or the other.
What god is that?
The god of roads or open doorways?

Perhaps it is the salt god,
that floats you on the water.
Or the god that tends the garden,
pruning, weeding,
sweeping the dead leaves and branches.
He asks no questions.
He is very quiet.
He looks as you
as you walk through the entrance.
He notes the patterns that the sea
has made on you, the little ridges, indentations,
and the colours of the sky at dawn.

With the marks of the sea’s fingers on you,
he leaves you free to wander in this garden.
You watch the muscles in his shoulders as he works
and you move closer to him. 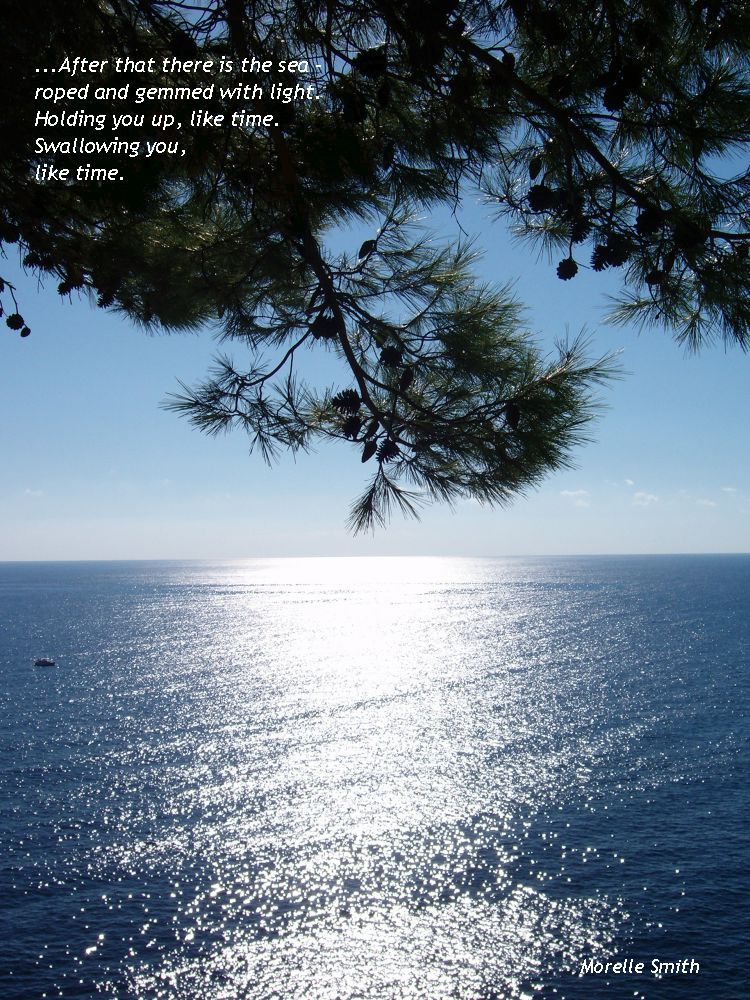 This street is crowded in the mornings,
coloured dresses hanging outside shops,
metal pans flash sunlight,
voices rise and fall, a shout of greeting,
women’s laughter –
then the warble of a songbird.

In the afternoon, the shops and kiosks
are all closed. A thin cat hesitates
in front of delicate wrought iron gates
leading to a garden with a palm tree.
The house is shuttered, silent, in the heat.

The cat slips through the gap between the railings.
There is no shade of tree or awning in the empty street.
Even the caged bird’s song is paralysed with heat. 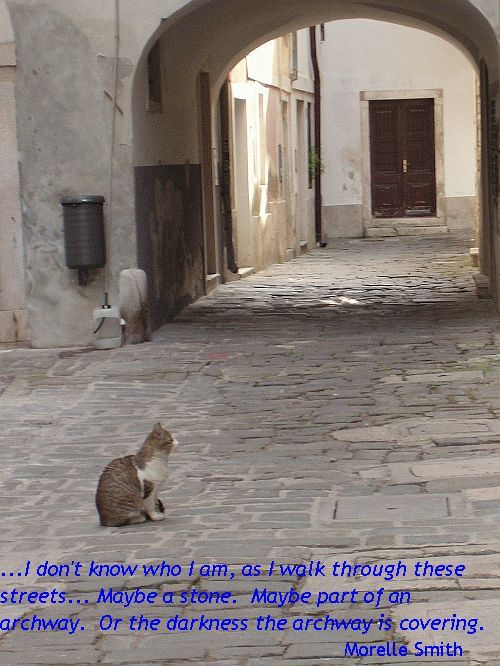 For thirty years I had this image in my mind,
a dark piazza in December, almost empty,
where fog gossiped in the narrow streets,
it slipped and floated, in the near-deserted square.
It slid off the greenish water
misting the lights and carpeting the cobbles
eavesdropping on the people in the restaurants,
just the suck-splash of the ripples
in the vaporetti wakes.

The image in my mind
was from the far side of the square,
San Marco’s church obscured by fog,
but this time, I arrived beside
the dominating brooding church
flinging a cold beauty in your face
as if it said – you’ll worship me
and not the empty space inside me,
God’s domain. I dutifully took a picture,
which I hadn’t done, those years ago –
and yet it lacks the 30-year perspective,
where the piazza and its empty space
is in the foreground and mostly, what is seen
is fog and the way the shop and restaurant
lights throw shiny trails on cobbles,
and the sound of peoples voices,
spiralling in mist, that’s what
I remember most, and the old church,
almost overlooked, a ghostly presence
in December rain.

It rained this time as well,
rain on green water, rain on people’s voices,
and the sound of footsteps
in the narrow streets
and the trundling sound of handcarts
in the water city, with no traffic sounds.
The only noise is talk and footsteps
people calling to each other
sounds of water slapping against stonework,
in the rain. 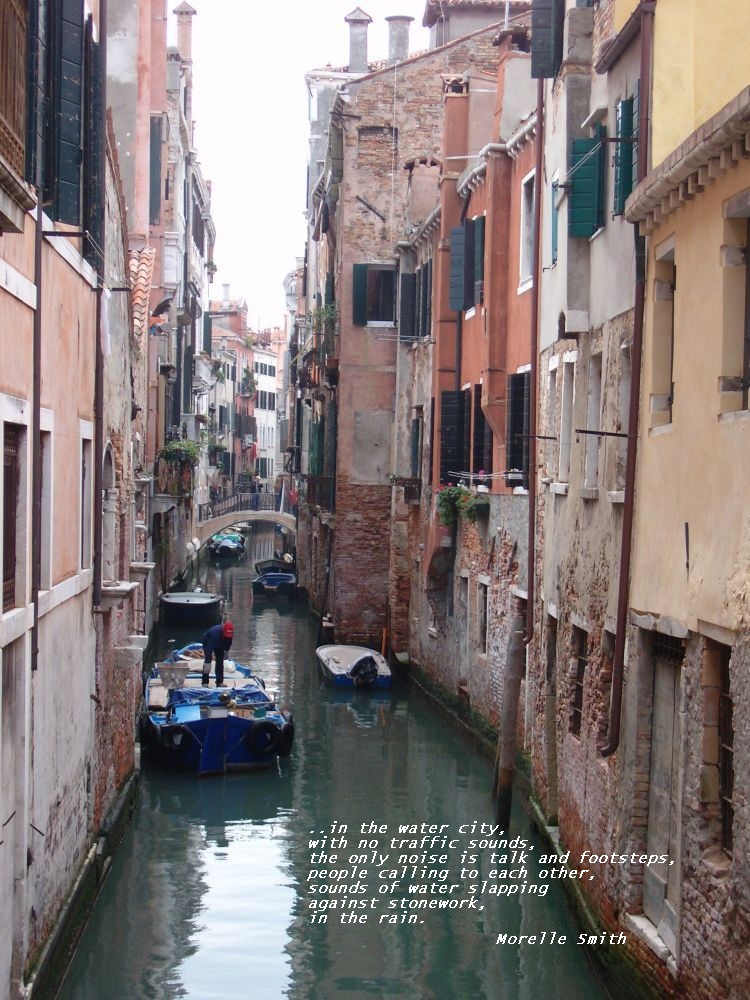 This island’s rocks are like bones.
Rounded, bleached, light;
curves, hollows
and smooth holes in the stones.

The air is shaky with heat.
Across the red fields with low walls
of chalky bubble stones,
a wide-winged bird floats and circles slowly.

Short thorny trees, olive-green,
wear their tilted branches
like a beret, at an angle to the earth –
a short green slope.
All growth is flattened,
skewed and breathless
from the weight of heat.
The bulbous cacti grow
no higher than the beret-angled trees –
just spread out further,
with their thick and shiny,
light-green knobs of growth.

There is no movement,
now the bird has gone.
And no sound at all.
Not even one cicada.
This enormous silence
is not what I am used to.
It joins everything.
Just like God is meant to do.
Now I know why the Buddha
sat beneath the bodhi tree.
He was listening to the silence.

I am sitting underneath a twist
of green tree with a strip of shade
beside it and the silence
slipping through into my bones. 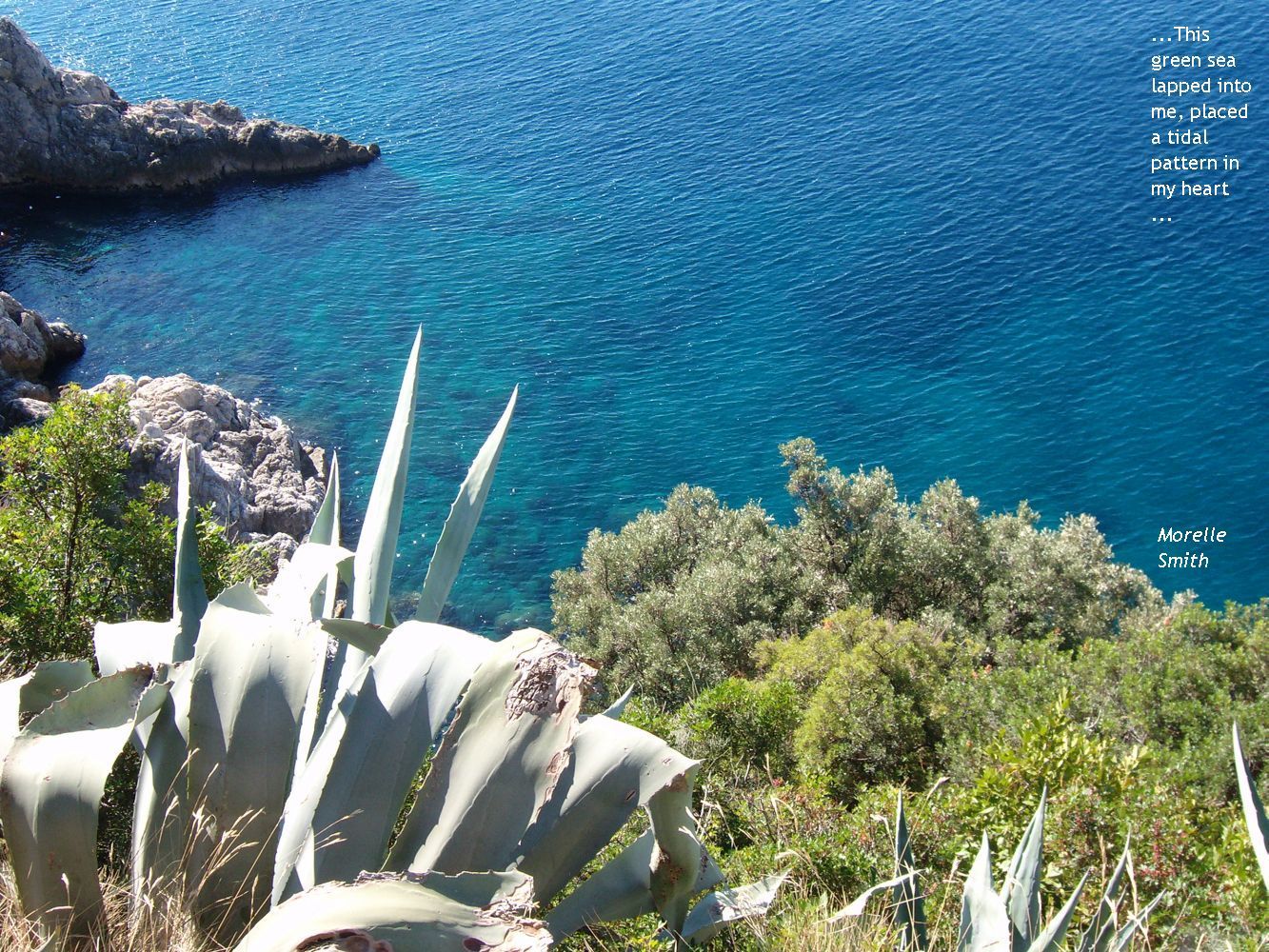 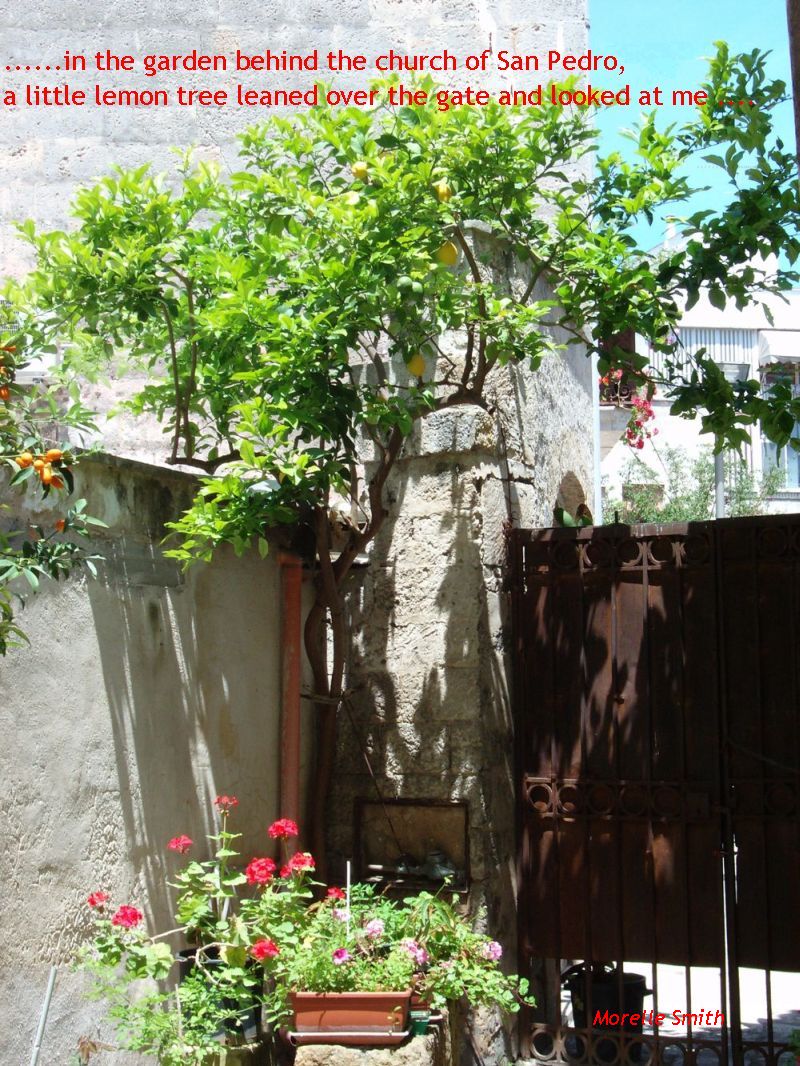 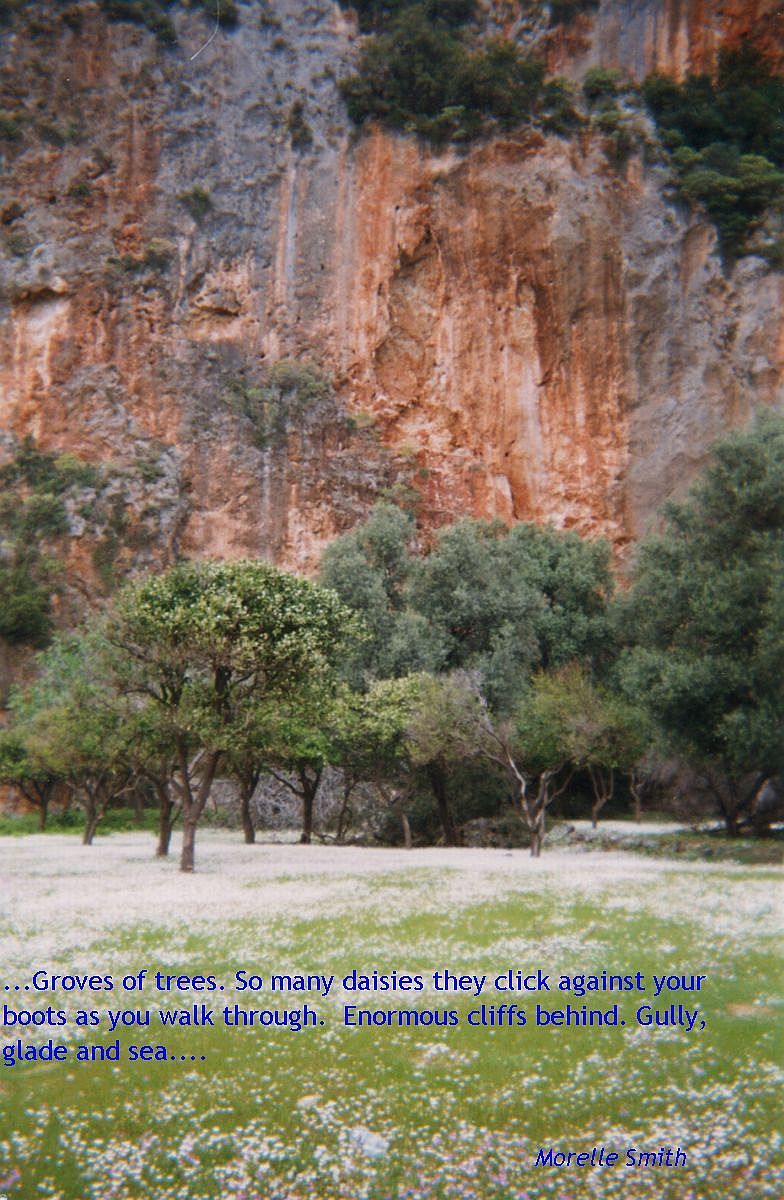 
THE ODYSSEY - HOMER - FROM BOOK XII
“While we were doing all this, Circe, who knew that we had got back from the house of Hades, dressed herself and came to us as fast as she could; and her maid servants came with her bringing us bread, meat, and wine. Then she stood in the midst of us and said, ‘You have done a bold thing in going down alive to the house of Hades, and you will have died twice, to other people’s once; now, then, stay here for the rest of the day, feast your fill, and go on with your voyage at daybreak tomorrow morning. In the meantime I will tell Ulysses about your course, and will explain everything to him so as to prevent your suffering from misadventure either by land or sea.’
Translator: Samuel Butler
This website uses cookies to improve your experience. We hope you're ok with this, but you can always opt-out if you wish. Accept Read More
Privacy & Cookies Policy