Pat Boran is an Irish poet, broadcaster and publisher who lives in Dublin. He has published more than a dozen books of poetry and prose, most recently A Man Is Only As Good: A Pocket Selected Poems (2017) and Then Again (2019). His writing handbook, The Portable Creative Writing Workshop, has been reprinted many times. His books have been translated into Italian, Portuguese, Hungarian and other languages, and he is a member of Aosdána, an affiliation of Ireland’s creative artists.

Play some romantic music
for these two brave fighters,
wrapped around each other here
like lovers, like old friends
reuniting, like drunks lunging
when the last bar closes
and they’re tossed out into the night
throwing punches and poses
and holding each other tight –
for without each other, that’s right,
they’re all alone in the world.

Who could blame you, Giovanni Cardenas,
powerful citizen though you evidently were,
for choosing to face death with your faithful mongrel
crouching by your feet? What else is there

of a creature who in darkness, as he did in light,
waits for you to wake and to set aside
like some old book what fears remain, then move
on through the long grass of the afterlife.

If you look closely, holding your breath,
you can almost see him step
from one green leaf to the next,
the bird on this hand-painted plate
you’re unable to pass. The gold
and blue of his plumage
echoes the motion blur
that decorates the outer ring,
as if, plucked out of time,
this is but a single still
from the short film of a life
before film exists. The plate
as globe and cosmic wheel. The plate
as article of faith: Please God,
we will eat today, the sun
will fall then rise and, if we are blessed,
that bird we glimpsed just yesterday
will come again to sit
and sing in our tree, the world
turned upside-down in its ecstasy:
the blue of the sea in its feathers,
the tamed sun
perched on its dazzling breast.

Like two startled meerkats
sensing a predator’s approach –
the return of the king
from some battle, the arrival
of his wayward, ‘inquisitive’ son –
hoping not to be chosen
these two female servants
take a deep breath
then stand so utterly still
that not only the moment
but the greater part of recorded history
passes them by,
all the ugly intentions of the world
muttering to themselves as they vanish
back into the night.

– Female Figurines, circa 1200 BC. Leventis Municipal Museum of Nicosia, Cyprus 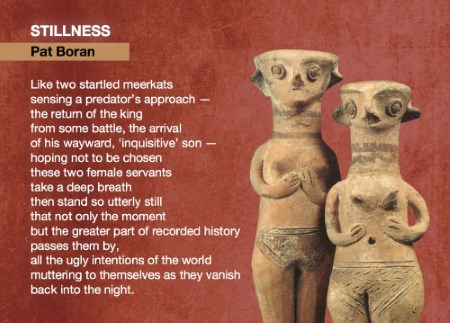 Last night, someone with a dog
came strolling down
this narrow cobbled street

about this hour,
a light fall of rain just passed
(as it has just now)

and, maybe pausing here,
admired, as I now do,
how light reflects

off the black volcanic stone,
the rippling sea of night
this golden city floats upon.

Last night, did I say?
I mean, of course,
two thousand years ago.

Poetry in this post: © Pat Boran
Published with the permission of Pat Boran


THE ODYSSEY - HOMER - FROM BOOK XII
“I had hardly finished telling everything to the men before we reached the island of the two Sirens for the wind had been very favourable. Then all of a sudden it fell dead calm; there was not a breath of wind nor a ripple upon the water, so the men furled the sails and stowed them; then taking to their oars they whitened the water with the foam they raised in rowing. Meanwhile I look a large wheel of wax and cut it up small with my sword. Then I kneaded the wax in my strong hands till it became soft, which it soon did between the kneading and the rays of the sun-god son of Hyperion. Then I stopped the ears of all my men, and they bound me hands and feet to the mast as I stood upright on the cross piece; but they went on rowing themselves. When we had got within earshot of the land, and the ship was going at a good rate, the Sirens saw that we were getting in shore and began with their singing.
Translator: Samuel Butler
This website uses cookies to improve your experience. We hope you're ok with this, but you can always opt-out if you wish. Accept Read More
Privacy & Cookies Policy