For half the year Roger Jinkinson lives in a small village by the sea on the island of Karpathos in Greece. He rents a house there and has a small fishing boat. Roger keeps bees for honey, fishes for his supper and works on the conservation of this unique and beautiful ecosystem.

Roger also writes books: Tales from a Greek Island introduces us to the life and culture of the people of his village; American Ikaros is the biography of the writer and Hellenophile Kevin Andrews. Both books are available from Amazon or from the author via his website. A third volume More Tales from a Greek Island, will follow in the spring of 2012.

Two Sisters
They are two sisters living alone on a triangular plateau south of the village. I will not reveal their location: they should not be disturbed. On two sides of the plateau there are mountains, on the third is a cliff tumbling to the sea. The sisters live in a small stavlos, a single roomed dwelling of stone and cement with a soil and cement roof held up by untrimmed rafters. They sleep on the floor, hidden away in a dark room with a small fireplace. They have no electricity, no toilet, no running water. The remains of a small wind generator can be seen on the roof: at one time it provided a dim light, but the blades were swept away in a storm so now the sisters adopt the old method: they arise with the sun and sleep when it sets. The nearest water is a spring one kilometre away. Daily they make the trek to fetch a biton of eighteen litres of water, for them and their livestock. They keep goats: a flock of around forty, and they have cats and dogs. One of the dogs has three legs. The ladies explain the poor animal disappeared for four days and when found it had a wire wrapped round its leg and the leg was septic so they amputated. The goats and the dogs are well cared for. 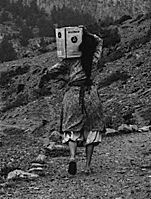 We are here to look at the birds and check on the wild life. We are not here to visit the women, but they are fascinating company and pleased to talk, so we stay with them a while. We are given a plate of drilla: the thick, white savoury that tastes a mixture of butter and cream cheese. We sit on tiny stools out of the sun balancing fat slices of bread on our knees. The sisters were born in the mid nineteen thirties, they are strong and healthy, though one seems to be blind in one eye. Conversation is difficult as their dialect is thick, but it is possible to get a rough idea of their life. I ask if they can read and am told they never went to school; they worked in the fields from the age of three, chasing birds and moving the goats up the mountain sides away from the crops. They remember the Italians coming at the beginning of the war (which they think was around 1937) and, in concert with other farmers, hiding livestock and grain from the German occupiers. They have relatives in the village and can walk there in three hours, unless, they tell me, they have a heavy load to carry, in which case it is four. Someone gave them a mobile phone with big buttons but, without electricity, the battery is flat and we have no charger in the car. A child has written one telephone number in large figures on a scrap of paper and there is a child’s picture of a house, with smoke coming from the chimney and two stick ladies outside. We promise to call the number when in the village and order, fruit and flour, matches and cakes. They love cakes. 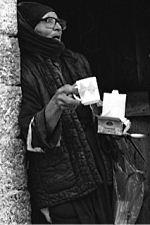 Sitting with them I am not in this century, nor the last, or the one before that. The conversation has a medieval ring to it: what they see is what they know. I ask about the land in front of us and receive a treatise on ownership and family ties. Pointing to each field and corner in turn they reveal a magnificent oral knowledge of kinship and ownership: this small field belongs to Iannis L…, who was married to Sophi whose son Georgos went to America for forty years and his grandchildren came back last summer. That one was our mother’s and she left it to our brother who died last year, so now it is divided between his two daughters. The stoney field over there belongs to Maria H…., who married the shepherd from Spoa. She inherited it from our aunt who died in the war and she is getting old now so here daughter Marina will get it. And on and on. I ask about the bird life. Of course there are eagles here and mavropetritis, Eleanor’s falcons, and one time a pelican arrived. The pelican must have been quite a sight trundling over the mountains to this 400 metre high plateau. In those days there was a pond and there must have been frogs and salamanders and other amphibia, but the water table lowers by twenty centimetres a year and the pond is now intermittent. It is late spring on the day of our visit and the fields are full of larks and other passerines. Their song mixes with the soft gargle of bee eaters that whiz over the high stone walls surrounding the rocky fields. From time to time the chuckle of perdikes, (partridges) trickles down the mountain side.

The sisters are happy to have company; laughing and pointing as they lead us to a small hut a hundred metres away. Here they make cheese. Inside we see forty or more moulds of cheese and along the edge of the roof another twenty, maturing in the sun. They chose one for us and tell me to soak it in salt water for a day and then it will be ready. They force me to eat more drilla and when I try to resist one of them tells me

the sou cammo ena ios
I will make you my son

and laughs when I don’t understand and tells me it is because she speaks Byzantian and has old thoughts.

We are here to look for eagles so we leave them for a while and take the steep path opposite. As we climb we can hear the sisters talking to their goats, each with its own name, and we see the three legged dog hopping about and barking. It is hot in the morning sun and from the ridge we see the boundaries of their life. Except for the daily trek for water and the occasional visit to the village, their world is five hundred metres in diameter, ‘though they don’t seem restricted by their geography, nor indeed their history. These are tough women, but open and friendly to strangers, bright and cheerful and full of energy. They have nephews and nieces and a cousin or two and clearly don’t feel abandoned.

We complete our survey of the area: no eagles, no buzzards, but plenty of Eleanor’s above and around us which is a pleasant surprise as these are rare birds and must nest on a previously unrecorded colony on the seaward side of the mountain on the west side of the island. We return to the plateau, pick up our cheese and find the sisters have written a list of shopping. The word cakes is underlined twice. As we go to the car the sister with one eye shouts thank you for coming and say hello to….and she struggles for the word, say hello to….To Cosmos.

Say hello to To Cosmos puts their life in context.


THE ODYSSEY - HOMER - FROM BOOK III
Minerva led the way and Telemachus followed her. Presently she said, “Telemachus, you must not be in the least shy or nervous; you have taken this voyage to try and find out where your father is buried and how he came by his end; so go straight up to Nestor that we may see what he has got to tell us. Beg of him to speak the truth, and he will tell no lies, for he is an excellent person.”
Translator: Samuel Butler
This website uses cookies to improve your experience. We hope you're ok with this, but you can always opt-out if you wish. Accept Read More
Privacy & Cookies Policy