Vassilis Rouvalis is a Greek poet, journalist and translator, born in Athens (1969). While still a student of Byzantine Philology at the University of Crete, he got acquainted with the works of the Cretan Renaissance, which marked him deeply with their creative potential. He is the author of three poetry books; his short stories have appeared in various volumes while his articles, translations of Italian poetry and literary criticism can be found in literary journals, major newspapers and various editions. In 2006 he launched the e-zine poema which focuses on poetry, essays and art. He is currently the director of (.poema..) editions. He works as an organizer and advisor for Book Clubs Network all over Greece and Cyprus, in contribution with the National Book Centre of Greece.

You sleep in my veins
I wake on your brow

Only the consequenses were late appearing.
Never again will I be who I was
Only Santa Maria remains
with the dusty child
the faded ochre on the walls
the feeling
that all is cracked that I so loved.
The darkness
lessens when I consider loneliness
the journey’s end.
Everything is immersed
In the Sicilian horizon’s truth.
With the river’s ancient bed
the night’s mendacities
the effort to feign the familiar.

I return with kisses
and monastery bells.
I remember you, Basilia
with your loose blond hair
singing
affectionately to Golden Horn.
I’ll never stop losing
imagination’s
hazy horizon
to breathe your breath.
The streets are still steaming. Nothing remains
for me to mourn.

I am standing on the terrace hillside as before.
The same imploring
wind
between the isle of Venetico
and so many questions.
“Hold tight, hold tight!
Lower the mainsail, and luff-a-lee”…
The blue’s shower
intensifies.
Myths in the olive trees.
A bowlike sea.
And St. Elias screening
the light
with his hands. 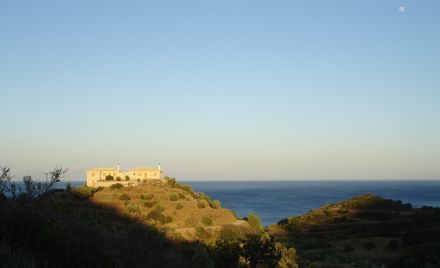 Published with the permission of Vassilis Rouvalis


THE ODYSSEY - HOMER - FROM BOOK VIII
So he hurried up without even taking his cloak off, and seized a disc, larger, more massive and much heavier than those used by the Phaeacians when disc-throwing among themselves. Then, swinging it back, he threw it from his brawny hand, and it made a humming sound in the air as he did so. The Phaeacians quailed beneath the rushing of its flight as it sped gracefully from his hand, and flew beyond any mark that had been made yet. Minerva, in the form of a man, came and marked the place where it had fallen. “A blind man, Sir,” said she, “could easily tell your mark by groping for it—it is so far ahead of any other. You may make your mind easy about this contest, for no Phaeacian can come near to such a throw as yours.”
Translator: Samuel Butler
This website uses cookies to improve your experience. We hope you're ok with this, but you can always opt-out if you wish. Accept Read More
Privacy & Cookies Policy