Cynthia Gallaher, a Chicago USA-based poet and visual artist, is author of four poetry collections, many with themes, including Epicurean Ecstasy: More Poems About Food, Drink, Herbs and Spices, and three chapbooks, including Drenched.

Wouldn’t you know
it would haunt me through a book,
that told how ancient Rome
was the first city built for a million,
how huge sewers beneath the street
carried and dumped into outskirt waterways,
not unlike today.

Then, in modern type, it spoke
sarcastically,
of burials as merely
bodies lobbed into open pits
that ringed the city.
Something snapped as crisply
as a page of history,
and grief welled up all over again.

And for the countless time,
like a printing press that runs all night
with no one watching,
I watched them throw her in,
my only consolation,
a strong body that fit
the occasion like armor,
thighs hard as marble,
through scarred and dirty as
Ohio pig iron,
and the burlap bag
wrapped around my hips
wasn’t at all like those flowing togas
from the movies.

It was only me watching,
the one who feared neither work,
nor rock, nor piercing sun, nor poverty,
standing beside the two
with mouths and noses
wrapped in cloth
to fight the stench.
I didn’t care what it smelled like.

I could have held a
memorial at our personal altar
like most Greek slaves in Rome,
then let the goons,
like garbage men, take her away,
but I couldn’t let her
out of my sight,
afraid anyone might harm her
dead or alive,
until she joined the others,
with our first little one
she still carried.

If I have a word
that might slip through the cracks
to the future, it is this:
All emperors’ pronouncements
you’ve heard about
had little to do with
what was going on.
It was ones like me
who built the city of Rome,
and this circle of putrification
that terrifies even the Gauls
is sweet compared with
the rot in the palace,
from whose effluent
she was forced to drink deeply.

All I have is a strong body,
a mind that fears the muffling of words,
armor enough for this life without her.
All I have is my loss,
my loss, that glows in white heat
between my temples.
All I give is
more work, more years, and fingers
that trace a hand-drawn silhouette of a
city that’s never really mine,
even whose destruction I’ll never see.

This is what I cling to
instead of a kingdom:
how God has crafted my sorrow
into a private work of art,
this grief, once solitary,
now shared among all to whom I’m born,
monumental,
to last the ages.

eye-striking, striated marble in Vermont,
sends me back again to ancient Rome,
reminding me how I long for that life
from another time remembered?

even modest marble slabs
atop indoor radiators to set pots
of humid-vending water in winter,
what can’t be done with all this classic rock?

here, I research ancient Rome for an amphitheater play,
uncover stifled and spiritual histories of women,
or is this for my own present reassurance
of those who held marble-rich power

in a more matriarchal tradition,
dissolved and delegated to the women’s work of weaving,
laundry, bathhouse assistance, temple harlotry,
that I somehow understand, or imagine?

marble, left to men of strength,
cutting, slicing, building,
I salute them, respect their fortitude,
admire their masculinity,

Roman men who built Rome,
but was it really their
Greek slaves, as I may have been,
who did the heavy lifting,

the intricate designs,
artisans no longer with
an upfront voice as the world expanded
beyond Athens’ idealism.

marble remains, its cultured contemporary
rock opera lives on, does not perish,
yet repeats a skewed and wavy subtext,
as other stories dig deeper within evolved soil,
those lower layers of strata,
and summon up human sweat evaporated millennia ago
circling the globe ever since
shaping today’s Vermont thunderclouds?

Spanish language radio drifts through stained glass,
students comprehend every fifth palabra
and forget what language to daydream in.

Sentences skirt along flamenco-ruffled rhythms,
each spicy companion cradles a different phraseology in one hand,
while a bilingual dictionary rests unopened in the other.

Latin mass memories recycle, Dominus vobiscum,
an asymmetrical song and a metered click from an incense burner
cleave music and odor to multi-tongued crowds of the past.

Where are the Polish grandmas who grasped rosaries, whispered prayers,
“Peash, pa-peash, peash,” in the pews behind me. “Brakuje mi ciebie.”
Shushed soundtracks of three-day wakes.

Fast forward, the Greek priest blesses another funeral
making the sign of the cross opposite of Jesuits,
Parakletos hovers 40 days after death
before the dearly’s heavenly departure: A queue forms.

The Greek priest spoon feeds wine to the chatty and taciturn alike,
a redemptive alphabet soup bears a celestial lexicon,
each mouth forms
a silent omega.

he waved his fleece to catch Selene’s attention,
it was his face that drew her fancy,
enough to pause her new moon chariot
to descend, embrace this youth
rushing toward his own mortality.

“If only he could live forever,
never die,” she wished a goddess’ wish.
He fell asleep for 30 years, strong, vital,
dreamed only of his love, the moon,

a moon who to caress him
in different milky beams each night,
to swell her belly month by month
with 50 daughters
of the lunar Olympiad 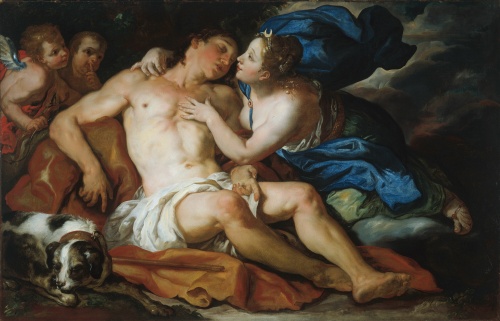 
THE ODYSSEY - HOMER - FROM BOOK III
“Nestor,” said he, “son of Neleus, honour to the Achaean name, you ask whence we come, and I will tell you. We come from Ithaca under Neritum, and the matter about which I would speak is of private not public import. I seek news of my unhappy father Ulysses, who is said to have sacked the town of Troy in company with yourself. We know what fate befell each one of the other heroes who fought at Troy, but as regards Ulysses heaven has hidden from us the knowledge even that he is dead at all, for no one can certify us in what place he perished, nor say whether he fell in battle on the mainland, or was lost at sea amid the waves of Amphitrite. Therefore I am suppliant at your knees, if haply you may be pleased to tell me of his melancholy end, whether you saw it with your own eyes, or heard it from some other traveller, for he was a man born to trouble. Do not soften things out of any pity for me, but tell me in all plainness exactly what you saw. If my brave father Ulysses ever did you loyal service, either by word or deed, when you Achaeans were harassed among the Trojans, bear it in mind now as in my favour and tell me truly all.”
Translator: Samuel Butler
This website uses cookies to improve your experience. We hope you're ok with this, but you can always opt-out if you wish. Accept Read More
Privacy & Cookies Policy