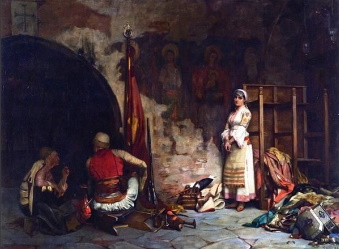 The Spoils of Ibrahim

Maiden sister of a mountain fighter
spinster of Solos
overshadowed by her brother’s fame
victim of his valor.

One solace only
the nearby chapel
Saint George’s cool
domed shelter.

Accosted by the ravager of Morea
a living virgin ravished.
Saint George, her mounted
red-crossed soldier-saint—
patron of her prayers—
now rears himself before her
demonically transformed
a turbaned fiend.

Ransomed years later
the sum exorbitant.
A price far worse—
her name erased
forgotten by her clan—
disgraced
the memory of infamy
repressed.

**In May of 1826, Ibrahim (son of Muhammad Ali, the Ottoman Governor of Egypt), who had been enlisted by the Ottoman Sultan to quell the Greek rebellion, undertook a campaign to suppress the revolution in the Peloponnese (Morea). Among his most brutal tactics was the abduction of women and children in the mountain villages of Achaia, many of whom were sent to slave bazaars in Egypt and North Africa. The story relayed in the poem is a true account of the plight of the sister of Nikolaos Soliotis, one of the prominent freedom fighters of the Greek insurrection.

For other contributions by Peter Jeffreys, please follow the link below:


THE ODYSSEY - HOMER - FROM BOOK VIII
Now when the child of morning, rosy-fingered Dawn, appeared, Alcinous and Ulysses both rose, and Alcinous led the way to the Phaeacian place of assembly, which was near the ships. When they got there they sat down side by side on a seat of polished stone, while Minerva took the form of one of Alcinous’ servants, and went round the town in order to help Ulysses to get home. She went up to the citizens, man by man, and said, “Aldermen and town councillors of the Phaeacians, come to the assembly all of you and listen to the stranger who has just come off a long voyage to the house of King Alcinous; he looks like an immortal god.”
Translator: Samuel Butler
This website uses cookies to improve your experience. We hope you're ok with this, but you can always opt-out if you wish. Accept Read More
Privacy & Cookies Policy